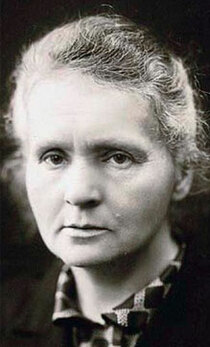 From LSHTM: "Marie Sklodowska-Curie was the first woman to win a Nobel Prize, the first person to win twice, and the only person to win a Nobel Prize in two different sciences: physics and chemistry. As a woman, she was not permitted to attend college in Warsaw, so she did it illegally through a secret Polish institution of higher learning known as the Flying University.  After leaving for Paris where she could study, her work with her husband led to the discovery of polonium and radium. Marie was jointly awarded the Nobel Prize in Physics in 1903. She went on to win the Nobel Prize for Chemistry in 1911. Marie was the first woman to teach at Sorbonne University. Her research was crucial in the development of x-rays in surgery, and during WWI she helped equip ambulances with x-ray equipment and used them to triage on the front lines."

Born Warsaw as Maria Salomea Skłodowska. 1891 moved to Paris to study. In 1895 she married French physicist Pierre Curie, and she shared the 1903 Nobel Prize in Physics with him and with the physicist Henri Becquerel for their pioneering work developing the theory of "radioactivity"—a term she coined. The couple had 2 daughters. In 1906 Pierre Curie died when he was run over by a heavy horse-drawn cart in a Paris street. Marie died in Passy, France.

This section lists the memorials where the subject on this page is commemorated:
Marie Sklodowska-Curie

Formed as a merger of the Chemical Society, the Royal Institute of Chemistry,...