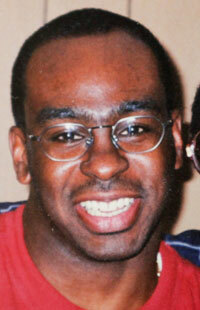 Despite him being shown on the September 11 Memorial Garden plaque as Marcus R. Neblett, his name is displayed on the 9/11 Memorial in Manhattan, New York, USA, as Rayman Marcus Neblett and it is this latter name that was used to register his birth in Lambeth in 1970.

Rayman Marcus Neblett was born on 29 August 1970 in Lambeth, the son of Colin Neblett and Zandra Lane Neblett née Butts.

He moved to America, initially living in the Queens area of New York and in 2000 moved to Roslyn Heights, Long Island, New York. He had started to work for the Aon Corporation in early August 2001 and was in their offices on the 98th Floor in the South Tower, 2 World Trade Centre, Manhattan, New York, USA, when he died, aged 31 years, on 11 September 2001.

This section lists the memorials where the subject on this page is commemorated:
Marcus R. Neblett

Martin King was a company director, killed in the Ladbroke Grove rail disaste...

The story is well told at Times of Malta. The cutting equipment used in the r...