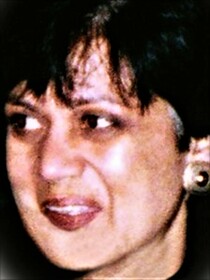 Mala Ashok Amin was born on 17 August 1953 in Narobi, Kenya. She married Ashok Trivedi in 1975 and the Civil Registration Marriage Index shows that in the 3rd quarter of 1975 a Malaben R. V. Amin was married to an Ashok K. M. V. Trivedi in Brent registration district. (Our picture source also refers to her as Malaben Trivedi, but we have shown her name as that used in the Coroner's Inquest Report). They had one son, Kunaal Ashok Trivedi whose birth was recorded in the 4th quarter of 1986 in the Lambeth registration district.

Electoral registers for 2003 and 2004 show her listed at 15 Allonby Gardens, Wembley, HA9 8QX and she was the Pictures, Archiving and Communications System (PACS) administration manager at Great Ormond Street Hospital for Children. Her obituary can be found on the BBC News website.

She died, aged 51 years, on 7 July 2005 when travelling in the underground tunnel of the Piccadilly Line on the London Underground Railway between King's Cross and Russell Square underground stations that was targeted by a suicide bomber. The narrative verdict of her death can be found on the Coroner's Inquest Report.

This section lists the memorials where the subject on this page is commemorated:
Mala Ashok Trivedi

A project worker for a charity for homeless children. Killed in the Ladbroke ...