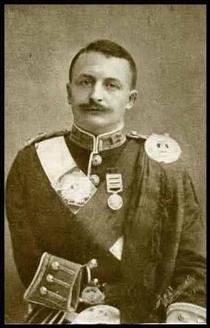 He died following a fall from his horse in Hyde Park.  Brookwood Cemetery reports: “His horse was startled by the salute during an OTC inspection and galloped away towards a group of children. To avoid them, Meiklejohn turned his horse against the railings of Rotten Row. He was thrown off and never regained consciousness. The Times reported it as an act of heroic self-sacrifice.”   Our thanks to Carly Meik for this.

This section lists the memorials where the subject on this page is commemorated:
Major Matthew Meiklejohn, VC