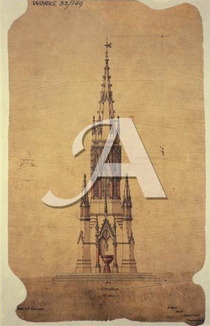 The Vizianagaram district is on the east coast of India about a third of the way down.

We get the impression that every one of the words in this man's name has at least one alternative spelling, e.g. "Vijayanagram / Vizianagaram".  Wikipedia gives the name of the Maharajah at the relevant time, 1867, as Pusapati Vijayarama Gajapati Raju (1845 - 1879), but many of his relatives had exactly the same name - all four parts of it, so we didn't really feel that we have identified him.  (One wonders how they managed.)

But using his date of death we found: "Maharaja Mirza Pusapati Sir VIJAYARAMA III GAJAPATHI Raju Bahadur, 11th Zamindar of Vizianagram 1845/1879, born 1826, the zamindari was under control of the English until 1852, Member of the Viceroy's Council, granted the title of Maharaja as a personal distinction on 11th March 1864, K.C.S.I., entitled to a personal salute of 13 guns."

There's probably of picture of our man on this Facebook page but darned if we know which one.  So we have used a drawing of his proposed fountain, 1866.

Former county. It became a shire in the 10th century, but most of the area wa...