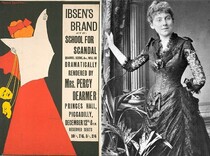 Novelist, playwright, translator and illustrator. Born Jessie Mabel Prichard White, daughter of Surgeon-Major William White. Her illustrations were accepted by the Yellow Book. 1892 married Percy Dearmer and had two sons: Geoffrey and Christopher. Died serving with an ambulance unit in Serbia in WW1 only 3 months after leaving England. She and Christopher are commemorated on the war memorial fountain in Oakridge Lynch, near Stroud, Gloucestershire. Tower Project Blog has some interesting information. We couldn't find a picture of Mabel but are pleased to use one of her striking illustrations instead.

2014: an exhibition at the British Library displayed a photo of Mabel, with Mrs Stobart in Serbia, with the text: She "was opposed to the war on religious grounds although both her sons enlisted. In March 1915, at a farewell service for the Third Serbian Relief Unit (a unit of women doctors and nurses), she discovered that her husband Percy had been accepted as Chaplain to the British units in Serbia. Dramatically at the end of the service she approached Mrs Stobart, the leader of the unit, and asked to join. .... Appointed as orderly in charge of linen, she died in Serbia of typhoid only a few months later.

2022:Our colleague, Andrew Behan, found an image of Dearmer at Ancestry.co.uk.  We only have one slot for an image and, not wanting to lose the illustration, we have squeezed both images into the space.

This section lists the memorials where the subject on this page is commemorated:
Mabel Dearmer

On the Just Giving page: "The names on the beautiful but fading current memor...

Artist. Born in Seville. Best known for his religious works, he also produced...