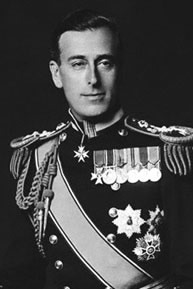 Admiral of the Fleet. 1st Earl Mountbatten of Burma. Grandson of Queen Victoria and uncle of Prince Philip. Born Frogmore House, Windsor and known by family and friends as Dickie.

His wife's, Edwina's, supposed affair with Paul Robeson was a great scandal. After some of her affairs they apparently agreed to have an open marriage and he had a relationship with Yola Letellier. Something about the marriage is probably indicated by him having names for his wife's breasts: Mutt and Jeff.  Rumours and the FBI also had him down as a homosexual. These rumours come from the Scotland Herald. After Edwina's death he had a long-running affair with Shirley MacLaine, whom he had met in the 1960s.

Played an influential role in the upbringing of Prince Charles.

Important commander in WW2. Supervised the transfer of power from India to Pakistan. Assassinated on a fishing trip on Bank Holiday Monday by the IRA who planted a bomb in his family holiday boat in County Sligo. Three others also died.

This section lists the memorials where the subject on this page is commemorated:
Lord Louis Mountbatten

Plaque unveiled by the Prince of Wales accompanied by the Mountbattens' daugh...

This section lists the memorials created by the subject on this page:
Lord Louis Mountbatten