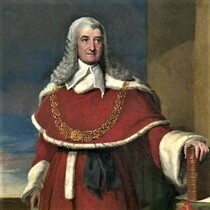 His life is described in his Wikipedia page which confirms that he married Theodosia Anne Vevers (1779-1852) on 18 October 1804 in Saxby, Leicestershire and they had eleven children, including their fourth son George Denham. The Wikipedia page (as at August 2021) shows his date of birth incorrectly as 23 July 1779. Baptismal registers at St James's Church, Piccadilly, Westminster, record that he was baptised there on 20 March 1779 and that his date of birth was given as 23 February 1779.

He served as the Lord Chief Justice of England and Wales from 1832 to 1850 and in 1834, he was raised to the peerage as Baron Denman, of Dovedale, in the County of Derby. His Derbyshire seat was Middleton Hall, Stoney Middleton, Hope Valley, S23 4TN.

He died, aged 75 years on 26 September 1854 at Stoke Albany, Northamptonshire and was buried in the churchyard of St Botolph's Church, Lower Road, Stoke Albany, Market Harborough, LE16 8PZ on 30 September 1854. The Lord Denman public house at 270-272 Heathway, Dagenham, RM10 8QS is named after his association with the nearby site of 'Parsloes'.

This section lists the memorials where the subject on this page is commemorated:
Lord Denman

Born Lancashire but brought up in London. A friend of Jeremy Bentham, Bentham...

Born as Thomas Henry Bingham on 13 October 1933, his birth was registered in ...