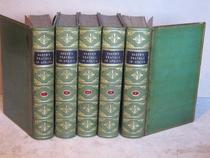 Thomas Longman (1699-1755) through an inheritance acquired a publishing house, The Ship, in Paternoster Row (the street of book publishers) and shortly after, The Black Swan, next door. Daniel Defoe’s Robinson Crusoe had been published by The Ship a few years before the purchase so it was a profitable business. Thus a ship and a swan become the emblems for the business. The Ship Binding Works, a subsidiary company, was formed in 1887 and managed for a time by Hubert Harry Longman (1856–1940). Production at the Ship Binding Works ceased following a wartime bomb and fire in April 1941.

We think the Ship Binding Works specialised in fine leather bindings, as shown in our picture. More information about the firm at the Oxford Dictionary of National Biography.

This section lists the memorials where the subject on this page is commemorated:
Longman's Ship Binding Works

We did not find the website of The British Postal Museum &amp; Archive terri...

Newspaper vendor for 30 years in Hampstead