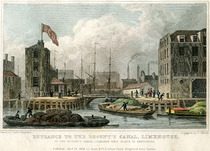 The basin was built, as "Regent’s Canal Dock", by the Regent's Canal Company so that goods could be taken from sea-going vessels in the Thames and transferred to canal boats for distribution along the Regent's Canal. Initially a failure, it became the most important point of entry for access to the entire canal system, especially for coal.

A London Inheritance explains how this basin was used as the western end of the Limehouse Cut 1853-64.

By the mid 20th century the entire canal system was put out of business by the railways and the basin was closed to commercial traffic in 1969. At the same time the basin again became the route from the Thames through to the Limehouse Cut.

Redevelopment of the basin started in 1983 and was still on-going in 2008.

This section lists the memorials where the subject on this page is commemorated:
Limehouse Basin

{At the centre of this circular plaque/low relief sculpture:} This plaque was...

A building firm based in Barretts Grove, Stoke Newington, active in 1891. Slu...

From British History Online we've learnt that lordships are something that co...