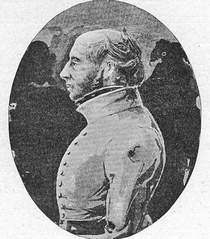 Founder of Ottawa, the capital of Canada. Lieutenant Colonel in the Royal Engineers. Born Lambeth and baptised in the church of St. Mary-at-Lambeth, August 10, 1779. After a distinguished career in Canada and in the Peninsular War, he was called out of retirement in 1826 and sent to Canada to build the 200 kilometre Rideau Canal waterway from Ottawa River to Lake Ontario. It opened in 1832. By retired to Frant, East Sussex, where he died.

This section lists the memorials where the subject on this page is commemorated:
Lieutenant Colonel John By

2022: The The Historical Society of Ottawa contacted us with "We recently (re...

Town in Egypt. The name means 'two worlds'. It was the scene of two battles i...