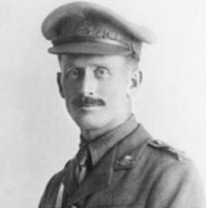 From East London Advertiser: "Pope, a one-time London bobby, was born in Mile End in March, 1883. He emigrated to Australia with his wife and two children in 1910. He enlisted in the Australian Infantry Battalion when war broke, serving at Gallipoli, then transferring to northern France in 1916 commissioned as an officer. His battalion was able to hold their sector of the front line largely thanks to his last stand. Charles Pope is buried at Moeuvres in France, his VC being displayed at Canberra’s Australian War Memorial."

This section lists the memorials where the subject on this page is commemorated:
Lieutenant Charles Pope VC

Edward Charles Wilkin was born in Melbourne, Victoria, Australia, the son of ...

Frank Sidney Levy was born in c.1887 in Canonbury, Islington, the second of t...