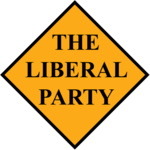 Founded at a meeting in Almack's / Willis's Rooms, when 280 Whig, Liberal, former Peelite and radical MPs met to agree on a strategy to remove Lord Derby's Conservative government.

The Guardian reports, at the unveiling of the plaque:
Duncan Brack, of the Liberal Democrat History Group... said of that meeting a century and a half ago: "Among those attending were Lord Palmerston, John Bright and Lord John Russell – and the meeting paved the way for the political ascendancy of Liberal prime minister William Gladstone."
Davis described the occasion as "momentous" and said: "When Palmerston, Russell and their Radicals, Peelites and Whigs coalesced around the issue of Italian reunification, at this very location in 1859, I am sure everyone expected the union to be a temporary one. For generations British political life has been fluid, with numerous changes of government, factions and minority administrations. However, for what was then such a disparate union, the Liberal party has endured, helping to shape so much of British politics since. And the timing of this unveiling could not be more appropriate, as its successor – the Liberal Democrat party – once more finds itself in government."

Note: The Radical Club is said to be a precursor to the Liberal Party.

This section lists the memorials where the subject on this page is commemorated:
Liberal Party

The Liberal Party was founded on this site 6th of June 1859. City of Westmins...

Diplomat and courtier.  Favourite of Queen Henrietta Maria (wife of Charles I...

Had been one of the group who arranged for the execution of Simon Burley.  Ki...