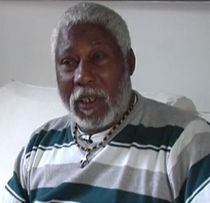 Director of the Notting Hill Carnival from 1973-1975. He played a key part in shaping the carnival into its modern form, and made a controversial decision to invite local Jamaican sound systems and black music bands to play at the festival.

Andre Behan has informed us that Leslie Palmer was born as Leslie Stephen Palmer on 21 August 1943 and was known as 'Teacher'. Electoral registers from 2003 to 2006 show him at Flat 16, Westhill Court, Denbigh Road, London, W11 2SJ.

This section lists the memorials where the subject on this page is commemorated:
Leslie Palmer

The Greenwich Society aims to make Greenwich a better place for all who live ...

Demolished after 1972 which is the date of this photo. Forebears says: "the ...

This is possibly the same group of Guy's alumni who gather each October for a...

Founded by Nicholas Reed. It aims to celebrate the life and work of the autho...