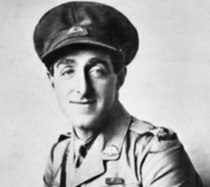 Soldier. Born Leonard Maurice Keysor (also known as 'Keyzor' or 'Kyezor') in Maida Vale. He emigrated to Australia in 1914, and at the outbreak of war, enlisted in the Australian Imperial Force. At Galipoli, he took part in the Battle of Lone Pine, and risked his life by picking up the Turkish grenades that landed in the trenches and throwing them back. Despite being wounded and ordered to seek medical attention, he remained at his post. For these actions, he was awarded the Victoria Cross.
He is credited as being the first Jewish soldier to win the medal, although Frank de Pass has the same claim.

This section lists the memorials where the subject on this page is commemorated:
Leonard Keysor VC

{Below an image of a Victoria Cross medal:} Lance Corporal Leonard Keysor, Au...

Prime Minister of Australia. Born in Pimlico. Migrated to Queensland in 1884....