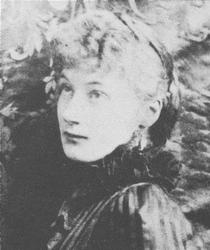 Credit for this entry to:
Margaret Wright

Laura was one of the sixteen children of wealthy Scottish industrialist and Member of Parliament, Sir Charles Tennant (later Lord Glenconner). He had a large house in Scotland, 'Glen', and one in Grosvenor Square. The two younger daughters were Laura and Margot (who was to marry H. H. Asquith. Laura, a small, lovely, lively, highly intelligent, mercurial and fascinating young lady, married Alfred Lyttelton in 1885, and died in childbirth on Easter Sunday, 25 April 1886. Her friends mourned her loss for years, and their closed circle became known as the 'Souls'.

Laura was a close friend of Frances Horner of Mells Park in Somerset and the Mells parish church holds a memorial tablet to Laura designed by Edward Burne-Jones.

We are indebted to Margaret Wright of Australia for this biography and the delightful picture.

Our colleague, Andrew Behan, has carried out some further research on this lady who was born on 26 October 1862 as Laura Mary Octavia Tennant, a daughter of Charles Clow Tennant (1823-1906) and Emma Tennant née Winsloe (1821-1895) at The Glen, Glen Estate, Innerleithen, Peeblesshire, EH44 6PX.

In the 1881 census she is shown at Easton Grey House, Easton Grey, Wiltshire, the home of her brother-in-law Thomas Graham Smith (1850-1908) and her sister Katherine Lucy Smith née Tennant. On 21 May 1885 she married The Honourable Alfred Lyttelton (1857-1913) at St George's Church, St George Street, Westminster. The marriage register shows her address to have been 35 Grosvenor Square, whilst he was residing at 21 Carlton House Terrace.

On 16 April 1888 she gave birth to their son Alfred Christopher Lyttelton (1888-1890) who was baptised on 25 April 1888 at St George's Church, Westminster. The date of her death shown on the memorial fountain at St James's Church, Piccadilly, i.e. 25 April 1888, is at variance with that shown on her memorial on the Tennant family gravestone, i.e. 24 April 1888, where she was buried at Traquair Kirkyard, Innerleithen, EH44 7PU,

This confusion is further compounded by probate records. These show that her husband was not given administration of her estate until eight years later on 21 March 1896. These records show that her address had been 4 Upper Brook Street, Middlesex and gave her date of death as 24 May 1886 (sic), wrong month, wrong year and who knows whether the day was correct or not. Her estate was valued at £170. Wikitree seems to have used 24 April 1888 as her date of death and the terms of her will gives a great insight into this lady.

This section lists the memorials where the subject on this page is commemorated:
Laura Lyttelton

Chairman and Secretary of Webheath Tenants Association for over 30 years, and...