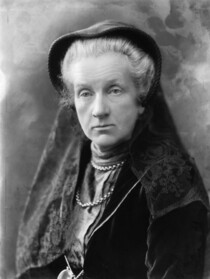 Liberal Women’s Suffrage Society and was on the executive committee of the NUWSS.

Born as Frances Campbell at Argyll Lodge in Kensington, her father being the 8th Duke of Argyll. Her brother, John Campbell, the 9th Duke, married Princess Louise.

Was one of the highest-ranking members of the British aristocracy to assume a leadership role in the Women's suffrage campaign in the United Kingdom. Balfour was a member of the Executive Committee of the National Society for Women's Suffrage from 1896 to 1919. She was opposed to socialism and to the militant actions of the Women's Social and Political Union, the suffragettes.

This section lists the memorials where the subject on this page is commemorated:
Lady Frances Balfour