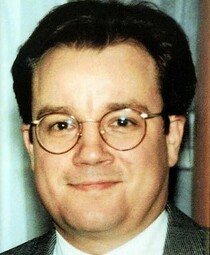 Dennis Butcher was born on 13 July 1958, the only son of Richard Dennis and Patricia M. Dennis née Butcher. His birth was registered in the Romford, Essex, registration district.

He started work in 1975 in the City of London before moving to the USA at the age of 22 years to work for the Chase Manhattan Bank. There he married Debra Yednak and they returned to England where their twin boys, Elliot Maxwell Dennis and Ryan Alexander Dennis were born in November 1994. Their births were registered in Westminster.

He was head-hunted by the Cantor Fitzgerald Group and the family returned to the USA, living in Peapack, New Jersey.

He was a stockbroker and died, aged 43 years, on 11 September 2001 working in the company's office on the 101st Floor of the North Tower, 1 World Trade Centre, Manhattan, New York, USA.

This section lists the memorials where the subject on this page is commemorated:
Kevin Dennis

Martin King was a company director, killed in the Ladbroke Grove rail disaste...