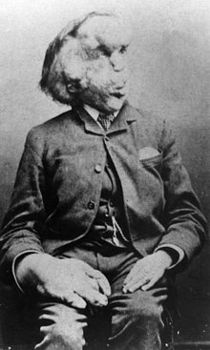 "The Elephant Man". Born Leicester. Began to develop severe abnormalities within a few years. By aged 17 his mother had died, his father and step-mother had rejected him, and failing to find a job, he entered the Leicester Union workhouse. After 4 years there Merrick contacted a showman with a business proposition: that the showman should exhibit Merrick. They toured the East Midlands and then came to London where the show took place in Whitechapel Road immediately opposite the London Hospital.

Frederick Treves, a surgeon from the Hospital visited the show and invited Merrick to the hospital to be examined and photographed. Merrick's show then went to Brussels where his road manager robbed and abandoned him. With great difficulty he made his way back to London and made contact with Treves who invited him to stay at the Hospital, where he stayed for the rest of his life, which was relatively comfortable and happy.

2018: Londonist tells us that, now the Royal London Hospital, there is a small museum there which includes information on Merrick.

2019: On his death Merrick's skeleton was preserved at the London Hospital but his soft tissue was buried.  The cemetery and the exact plot have now been identified.

This section lists the memorials where the subject on this page is commemorated:
Joseph Merrick / John Merrick

From AIM: "Medical students at St Bartholomew's Hospital are first recorded i...

The badge was introduced as a successor to the former Nightingale Badge. It i...