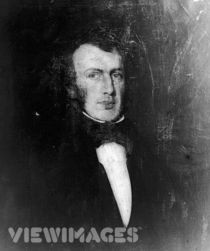 Architect, founder/editor of The Builder and inventor of the Hansom cab.  Born York as Josephus Aloysius Handsom(e) into a Roman Catholic family.   Made a habit of snatching failure from the jaws of success.

Trained as an architect and one of his early buildings, with Edward Welch, was Birmingham Town Hall, but since they had underwritten the construction firm this bankrupted the architects.

In 1834 he registered his design for a horse-drawn carriage and sold the patent for £10,000 but never received the payment, even though his vehicle, the Hansom cab, became ubiquitous in BBC costume dramas.

In 1843 he created the architectural journal 'The Builder', another successful enterprise from which he did not profit financially since it ran out of capital.  He returned to practicing architecture, designing more RC churches working with his brother Charles and his sons Henry and Joseph, and briefly with E. W. Pugin.  His London work includes the 1875 Our Lady of Dolours Servite Church in Fulham Road.

This section lists the memorials where the subject on this page is commemorated:
Joseph Aloysius Hansom

Pronounced Lez-ness. Founded by Richard de Lucy, as a penance for his role in...

Architect Born Fulham Palace, the son of the Bishop of London. Specialised in...