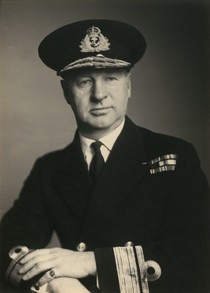 Co-churchwarden of Chelsea Old Church in 1958.

Andrew Behan has found someone who seems very likely to be our man - see below. He was living only about 100 yards the church and Andrew cannot find another man with that name in the vicinity. Our one doubt is the absence from the plaque of the retired naval title and C.B. honour.

Vice Admiral John Walter Durnford, C.B., was born on 25 October 1891 in Brompton, Kensington, a son of Richard M Durnford and Beatrice Mary Durnford née Selby. His father was a Civil Servant attached to the Charity Commission. The 1901 census shows him living with family at 9 Courtfield Road, South Kensington. He was admitted into the Royal Navy, aged 12 years, on 15 May 1904 and at the time of the 1911 census he was a Midshipman aboard the battleship HMS Queen, stationed with the Atlantic Fleet in Gibraltar.

On 22 December 1936, by now a Captain in the Royal Navy, he married an Australian, Marie de Lancey Greene, in Kensington. He was made a Companion of the Most Honourable Order of the Bath in the 1947 New Years Honours List and after the war they lived at 12 More's Garden, Cheyne Walk, Chelsea. He served at the Mayor of the Metropolitan Borough of Chelsea in 1962/63 and died, aged 75 years, on 7 February 1967 in Chelsea.

Brief history of his naval service.

This section lists the memorials where the subject on this page is commemorated:
John W. Durnford

Chairman and managing director of the Brilliant Sign Company. He purchased th...

Overseer of St Marys Rotherhithe in 1886.

Gladstone was born in Downing Street, the youngest son of William, who was Ch...