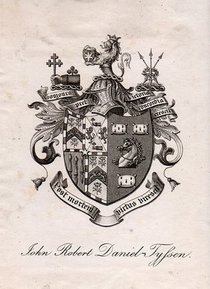 Brother of the lord of Hackney Manor, and manorial steward. His father's surname was Daniel and his mother's Tyssen, which suggests she was the one with the money. In the mid-19th century the Tyssen family, and especially John Robert, built up a historic collection of manorial records from the mid 17th century onwards, now held at the London Metropolitan Archives. We also found reference to a number of history books written by him. Born and died Brighton.

Tyssen acquired the New Mermaid Tavern and demolished it, building the Manor House on the site, the building that is there today.

Our picture is of his bookplate (best we could do).

This section lists the memorials where the subject on this page is commemorated:
John Robert Daniel-Tyssen

The Manor House, built 1845 for John Robert Daniel Tyssen, steward for the Ha...

Sculptor of, and historian on, decorative ironwork. Also wrote on geology and...

Literary antiquarian.  Born Co. Durham.  Trained as a lawyer and from 1780 ha...

Created to oversee the completion of the 'Wall of Heroes' in Postman's Park, ...