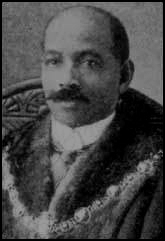 Political activist. Born at 3 Blake Street, Liverpool. He travelled the world as a seaman, living in Canada and the USA, before eventually settling in Battersea, where he opened a photographic studio. In1906 he was elected to Battersea Borough Council and became mayor in 1913. Not actually the first black person to reach this position in Britain, that was Allen Minns who became mayor of Thetford, Norfolk in 1904. He died at 46 Ouseley Road, Battersea.

This section lists the memorials where the subject on this page is commemorated:
John Richard Archer

Photographer. Born at Woburn, where his father was a gate-keeper to the Duke ...

Photographer. Born Munich. Co-founded the London Salon of Photography in ...