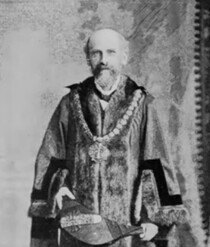 Chairman of the Plaistow Library Committee in the Borough of West Ham in 1902.

Apart from the information and image of John Kettle that is contained on the London Wiki website our research has found that he was born in 1849 in Forgandenny, Perthshire, Scotland, the eighth of the eleven children of James Kettle (1808-1885) and Margaret Kettle née Crow (1811-1873).

He was listed in the 1871 census as a clerk and a servant at 130/132 Marylebone Road, Marylebone, the home of John and Mary Hanbury, a grocer and wine merchant. Also shown on the census were five other servants, i.e. three male grocer's assistants, a female cook and a housemaid.

On 14 September 1880 he married Jane Russell (1848-1929) in Milton, Glasgow, Scotland, and in the 1881 census he is described as a grocer & provision merchant, living at 1 Earlham Cross, Woodgrange Road, Forest Gate, West Ham, Essex, with his wife.

On 8 February 1897 he was initiated into Freemasonry, being the first initiate of the newly consecrated Byfield Lodge No.2632 that met at the Great Eastern Railway Hotel, Liverpool Street, London.

In the 1901 census he is shown as a grocer and provision dealer, still living at 58 Woodgrange Road, Forest Gate, with his wife, whose forename was recorded as Jeanie, together with a female general domestic servant. He died, aged 60 years, on 13 April 1909 and was buried in the City of London Cemetery & Crematorium, Aldersbrook Road, London, E12 5DQ. Probate records confirm that his address had been 189 Earlham Grove, Forest Gate, and that when probate was granted on 19 May 1909 to his widow, who was recorded as Jeanie Russell Kettle, his effects totalled £9,848-18s-8d.

This section lists the memorials created by the subject on this page:
John Kettle

Trustee of The Memorial Gates Trust. Lakshmi Niwas Mittal was born on 15 Jun...

Chairman of The Solicitors Law Stationery Society Ltd. In 1951.