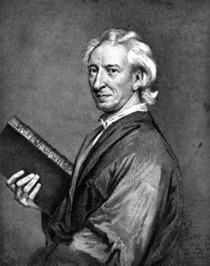 17th century diarist and garden designer. Born Wotton, Surrey. Through his 1647 marriage he came into possession of the Sayes Court estate in Deptford, on the Thames. As far as we can tell the possessions extended approximately from Princes Street in the south to Jodane Street in the north. He rebuilt the Sayes Court house and developed the surrounding grounds into an important and influential garden.

When he returned to Wotton in 1694 he let Sayes Court to Captain Benbow who was not a good tenant. Worse was to come when William III arranged for Tzar Peter of Russia to occupy the house for three months. He and his entourage trashed the place and the Treasury had to recompense both Benbow and Evelyn.

In 1695 he was appointed treasurer of Greenwich Hospital, so, although he lived the later part of his live at Wotton, he continued to travel to London about Greenwich Hospital business and he died at his son's house in Dover Street, London.

This section lists the memorials where the subject on this page is commemorated:
John Evelyn

This section lists the memorials created by the subject on this page:
John Evelyn

Environmental campaigner and botanist.  Brought up in London.  Built up a med...