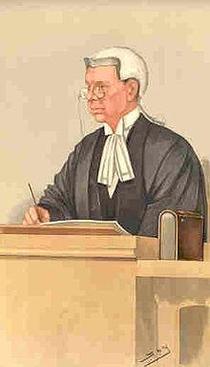 High Court Judge. Came from Lincolnshire. From Plymounth Law Review we learn: "John Lawrance was Conservative MP for South Lincolnshire for ten years, from 1880 to 1890, until his appointment as a High Court judge....the appointment was ‘greeted with hoots of derision.’ The Law Times had this to say about it: This is a bad appointment, for although a popular man and a thorough English gentleman, Mr. Lawrance has no reputation as a lawyer, and has been rarely seen of recent years in the Royal Courts of Justice ..... 'Long' Lawrance {he had a habit of endlessly delaying the judgements in difficult cases} ... was a stupid man, a very ill-equipped lawyer, and a bad judge."

This section lists the memorials where the subject on this page is commemorated:
John Compton Lawrance, QC, MP

These panels are above a door which we guess leads to the offices above with ...

From at least 1580 prison facilities were provided by the White Lion Inn.  Fo...

The construction was partly funded by a sharp increase in the fine for "forni...