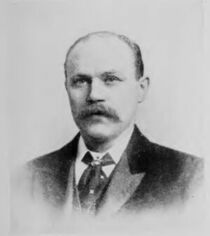 London Wikia records: Businessman and local politician. Born Canning Town, he was made a partner in the business founded by his father, which became John Byford & Son. They were lime, cement and brick merchants of Poplar. 1898 elected to West Ham Borough Council, becoming an alderman in 1901 and served as Mayor of West Ham 1904-5. Knighted in 1925.

This section lists the memorials created by the subject on this page:
John Byford, junior

Built in 1863 in the centre of Market Square, on the site of the Bromley Mark...