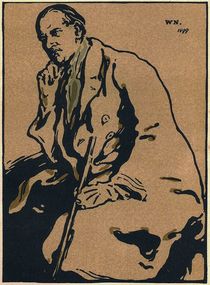 James Ferrier "Jimmy" Pryde. Born Edinburgh. Came to London in 1890. In 1893 he married Marian Symons and his sister Mabel married William Nicholson. That year also the Beggarstaffs began their partnership. This was an influential artistic collaboration between Pryde and Nicholson, lasting until 1899, which produced posters and other graphic work.

The 1899 portrait is by William Nicholson.

This section lists the memorials where the subject on this page is commemorated:
James Pryde

Artist who specialises in large-scale murals.