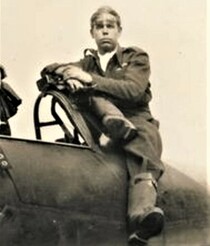 Pilot Officer James Geiger Coxetter was born on 29 October 1916 in Jacksonville Beach, Duval County, Florida, USA, the son of James Geiger Coxetter (1880-1940) and Alene Hoggatt Coxetter née Buckman (1883-1927).His father had been a Major in the United States Army. He attended military schools and the University of North Carolina before working at the United States Library of Congress, Washington D.C in 1939.

In September 1939 he began taking private flying lessons and in 1940 he left the Library, persuading the War Department to release him from a commission as a Second Lieutenant in the Reserve Corps to began training as a service pilot at the Polaris Flight Academy at Mojave Desert, California. The American Air Museum in Britain website states that he went to Canada and joined Royal Canadian Air Force as a Pilot Officer. He came to the United Kingdom and transferred to the Royal Air Force Volunteer Reserve, service number 104392, where he was assigned to No.133 (Eagle) Squadron, based at RAF Eglinton, Londonderry, Northern Ireland.

He died, aged 24 years, on 27 October 1941, flying his Hawker Hurricane Mk IIb aeroplane, serial number Z3182, when it crashed near Belfast, Northern Ireland. His body was repatriated into the care of his uncle, Henry Holland Buckman (1886-1968), of 518 Woodward Building, Washington D.C. and was buried in Section B, Lot 42, Grave 11, in the Jacksonville (Evergreen) Cemetery, 4535 North Main Street, Jacksonville, Duval County, Florida.

He is also commemorated in the Commonwealth War Graves Commission's website and on the United States Library of Congress War Memorial.

This section lists the memorials where the subject on this page is commemorated:
James Geiger Coxetter

Known as the ‘Mole Man’ because he spent forty years digging a series of tunn...