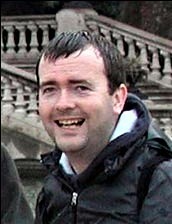 James Ernest Adams was born on 6 October 1972 in Chester, Cheshire, the son of Ernest Adams and Elaine Adams née Valentine. Electoral registers in 2003 show him listed at 23 Artindale, Bretton, Peterborough, PE3 9YL. He was an endowment mortgage specialist working for Deloitte Touche Tohmatsu Limited and his obituary can be found on the BBC News website.

He died, aged 32 years, on 7 July 2005 in the underground tunnel of the Piccadilly Line on the London Underground Railway between King's Cross and Russell Square underground stations that was targeted by a suicide bomber. The narrative verdict of his death can be found on the Coroner's Inquest Report.

This section lists the memorials where the subject on this page is commemorated:
James Ernest Adams

Saint in the Orthodox Church, killed by Bolsheviks.