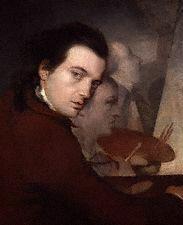 Painter. Born in Water Lane, Blackpool, Cork, Ireland. He studied in Italy and in 1782 he was appointed Professor of Painting at the Royal Academy. Because of abusive remarks about his colleagues, he was expelled from the academy in 1799. His paintings include 'Adam and Eve., 'Venus Rising from the Waves, and a set of murals at the Royal Society of Arts, called 'The Progress of Human Culture and Knowledge'. He was taken ill at an eating house, but could not be returned to his home, as his tormenting neighbours had jammed the keyhole of his front door with pebbles. He died at 76 Great Titchfield Street, the home of architect Joseph Bonomi.

This section lists the memorials where the subject on this page is commemorated:
James Barry

Stained glass artist. Thee is a memorial to Charles Eamer Kempe in the South...

Painted by the artist James Barry. They show, 'Orpheus', 'A Grecian Harvest-H...