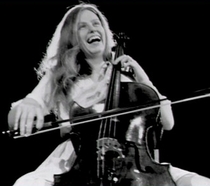 Composer. Born in Sheffield. He was accepted by the Royal Academy of Music (R...

Singer, Born Sussex.  At over 6 foot she had an impressive stage presence, as...