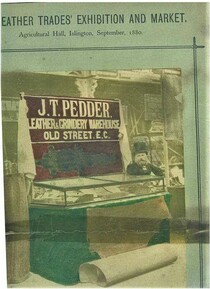 On 3 May 1845 he married Eliza Mary Linten (1825-1862) at St Mary's Church, Haggerston and the marriage register shows him to have been an office clerk residing in Mansfield Street, Haggerston. (Mansfield Street was later renamed to Whiston Road).

In the 1861 census he is described as a foreman to an India rubber manufacturer residing at 85 Murray Street, Shoreditch, with his wife and six of their children: John, Eliza, William, James, Mary and Hannah. His wife died on 2 March 1862 and on 26 April 1863 he was remarried to Eliza Ann Powell (1822-1904) at the Church of St Jude and St Paul, Islington. The marriage register shows him as a foreman of workers living at 85 Murray Street, whilst she is recorded as a spinster of 10 Lower Road, Islington.

The 1871 census recorded him as a leather seller living at 162-164 Old Street, Finsbury, with his wife and three of his children: Eliza, James and Mary. The 1881 census shows that he was now calling himself a leather merchant and that his address had expanded to 160-164 Old Street, Finsbury, where he was living with his wife, his daughter Eliza, together with a female domestic servant. King's Cross electoral registers from 1879 to 1886, although confirming his abode as 162 Old Street, also inform us that he occupied premises at 64 Noble Street, King's Cross.

We could find no image of John Thomas Pedder, but the family tree of a public member of ancestry.co.uk has an image of a brochure of a Leather Trades Exhibition at the Agricultural Hall, Islington in September 1880 showing J. T. Pedder's stand, with the skins, etc. on display. Whether or not the man in the picture is our John Thomas Pedder, we are unable to confirm. He was the Chairman and Treasurer of St Luke's School in 1887. In the 1891 census he is described as a leather merchant living at 169 Old Street, Finsbury with his wife and female domestic servant.

Probate records show him as a leather seller of 169 Old Street, St Luke's, Middlesex, who died on 27 January 1895 and who was buried on 29 January 1895 in Camden. Probate was granted on 8 March 1895 to his son James Pedder, leather merchant and to his daughter Eliza Taylor (wife of James Charles Taylor). His effects totalled £10,132-4s-2d.

2022: We were contacted by Alan Robinson, Premises Manager at St Luke's, who sent us a photo of Pedder, from a book on the history of St Luke's. It is a traditional Victorian portrait photograph of a gentleman, bearded, bald-headed, in frock coat with watch-chain. And we are convinced that the man sitting beside the exhibition stand is the same man. We only have space for one photo, which is a shame, but we think the man at the exhibition stand is more interesting than the portrait.

This section lists the memorials where the subject on this page is commemorated:
J. T. Pedder