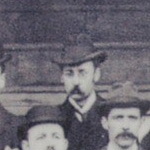 Andrew Behan has kindly carried out some research on this man: James Buteux Skeggs was born in 1860 in Shoreditch, the son of James William Skeggs and Sarah Ann Skeggs née Buteux. His father was a Dock Porter. On 9 September 1860 he was baptised at St Mary Church, Haggerston and the family were living at 1 Belgrave Terrace, Haggerston. The 1861 census shows that the family had moved to 2 Goring Street, South Hackney and the 1871 census records that he was living with his widowed mother at 122 High Street, Poplar. The 1881 census shows the family at 79 Gough Street, Poplar and that he was a Solicitor's General Clerk.

On 19 July 1884 he married Eliza Vine at St Mary's Church, Kilburn and their address was shown as 10 Smyrna Road, Kilburn. His occupation was given as a Solicitor's Clerk. Post Office London Directories and Electoral registers show that they were living at 9 Woodstock Road, Poplar from 1885 to at least 1915. The 1891 census records his occupation a Vestry Clerk and Post Office London directories for both 1895 and 1900 show him as Clerk to the Vestry of All Saints, Poplar Town Hall, Newby Place, Poplar. These directories for 1905 and 1910 list him as the Valuation and Rating Clerk to the Borough of Poplar and in 1915 as Accountant to the Borough of Poplar, whilst in the 1920 edition he is shown Town Clerk to the Borough of Poplar. Electoral registers from 1918 show him to be living at 72 Westcombe Park Road, Blackheath, Kent.

The London Gazette of 8 January 1919 lists him as Town Clerk, Poplar: Clerk to the Local Tribunal & Honorary Secretary to the Local Representative Committee, and announced that he was to be awarded an O.B.E. Probate records show that he died at 72 Westcombe Park Road, Blackheath on 11 April 1922, aged 61 years and was survived by his widow. His estate totalled £2,282-5s-7d.

Andrew points out that the Upper North Street School memorial, unveiled 23 June 1919, shows the Mayor as ‘Alfred H. Warren, OBE’ but Skeggs’s OBE is omitted. This honour had been announced a good 6 months prior to the unveiling so the omission looks like a mistake. But an even more insulting error was made with Warren's name, omitting his 'Sir'.

2019: We thank Mick Lemmerman for alerting us to Skeggs’ connection to Millwall Football Club. Island History lists him as one of the first shareholders of Millwall Rovers. With 30 shares, he was joint greatest shareholder. And there we found this photo showing him standing in the back row, 1896-7. We went on to find, at Scottish Sport History, two other photos of him (even smaller), in 1910, “... James Buteux Skeggs, a Millwall director who was also an FA Council member and Town Clerk of Poplar. The following year, Skeggs would serve on the organising committee of the dinner at which {Lord} Kinnaird was presented with the FA Cup."

Mick tells us that Skeggs House in Glengall Grove is named for him.

This section lists the memorials created by the subject on this page:
J. Buteux Skeggs

Architect and surveyor. Churchwarden of St Andrew-by-the-Wardrobe. He and his...