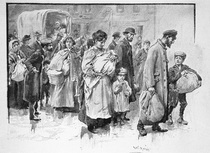 Spitalfields has experienced a number of waves of immigration from other countries, often driven from home due to difficult or dangerous conditions. The French Huguenots escaping religious persecution brought their silk weaving skills. Irish weavers arrived following the decline in the Irish linen industry. At the end of the 19th century Polish and Russian Jews came here fleeing pogroms. For almost 100 years Spitalfields was a predominantly Jewish area. Then in the 1970s the Bangladeshis arrived.

This is too big a topic for us to do it justice and we were surprised to find no appropriate website to which we could direct you. Wikipedia's East End of London is, for the time being, the best we could find.

This section lists the memorials where the subject on this page is commemorated:
Immigration to Spitalfields

We're read that this plaque, showing a map of the world, is intended to honou...

A club for Dutchmen who had escaped their occupied country to join the Allied...

A fund allocated to the European Union. It focuses on reducing economic dispa...