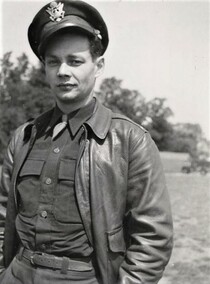 He joined the Royal Air Force Volunteer Reserve in 1940 in Canada and served as a Pilot Officer in No.133 Squadron, initially based at Biggin Hill Airfield, before transferring to RAF Debden on 9 October 1942. On 22 August 1942, the three Eagle Squadrons were officially transferred from the RAF to the Eighth Air Force of the United States Army Air Force and became a First Lieutenant in No.336 Fighter Squadron.

On 28 July 1943 he was flying a Republic P47 Thunderbolt aeroplane, serial number 41-6238, when it was shot down near Gouda, Holland. He was made a prisoner of war and was held in Stalag Luft III in Zagen, Poland.

This section lists the memorials where the subject on this page is commemorated:
Henry Ayres

The regiment was formed from the union of the 44th (East Essex) Regiment of F...

Canadian firefighter and competitive diver. A section leader from Saskatoon, ...

Trained linguists for covert work, mainly with Russian during the Cold War. ...