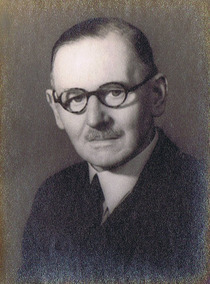 From London SE1: "...writer and artist who produced many pen and ink sketches of cathedrals, including Southwark, for A & C Black, J M Dent and other publishers.The seven bridges drawing first appeared in Gordon Home's book Old London Bridge which was published in 1931 to coincide with the centenary of the seventh crossing {Rennie's London Bridge} being opened by William IV. Gordon's son Gospatric Home told guests at last Wednesday's unveiling that it had been reproduced in a huge size on a wall at The Mermaid Theatre which stood in nearby Puddle Dock on the north bank."

From Normandy Then and Now: "Gordon was born on 25 July 1878 and lived to 91, passing away on 13 December 1969 in Midhurst, Sussex.  Sadly Violet {neé Violet Maude Chapman, married 1926} died many years before him on 24 June 1944, just a few days after their 18th wedding anniversary. Gordon did not marry again.  During his life Gordon worked at the Morning Herald in 1900, as art editor of The Tatler magazine in 1901 and The King.  He later worked at publishers A & C Black. He served as a Major in the Royal Army Service Corps from 1914-1920 in France and North Africa, and later travelled widely in North Africa, the British Empire and the Commonwealth.  As an artist, Gordon worked mainly in watercolour and pen and ink and frequently exhibited at the Royal Academy in London.  He was the author of many travel books including the beautifully illustrated Normandy: The Scenery & Romance of Its Ancient Towns (J M Dent & Co., 1905)."

Follow the Normandy link to see some lovely paintings and read Home's thoughts on Normandy.

This section lists the memorials created by the subject on this page:
Gordon Home

Unveiled by the Duke of Gloucester, this is actually an "interpretation panel...