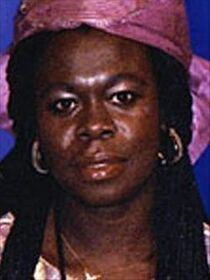 Gladys Ama Addae was born on 14 March 1955 in Ghana. After coming to the UK she married Emmanuel B. Wundowa in the Tower Hamlets registration district in February 1991. They had two children: Azuma Wundowa and Zakari Wundowa. Electoral registers show her having lived at both 41 Elderfield Road, London, E5 0LF and 28 Salcombe Drive, Romford, RM6 6DX.

Her obituary can be found on the BBC News website.

She was a cleaner at University College, London and died, aged 50 years, on 7 July 2005 whilst travelling on the upper deck of a Route No.30 bus that was targeted by a suicide bomber at Tavistock Square. The narrative verdict of her death can be found on the Coroner's Inquest Report.

She was also commemorated by the planting of an Indian Bean Tree (Catalpa bignonioides) on 23 March 2006 at UCL's Front Quad and a plaque was unveiled there on 5 July 2006.

This section lists the memorials where the subject on this page is commemorated:
Gladys Wundowa

For more information about this hero click on the picture of his plaque. MyL...