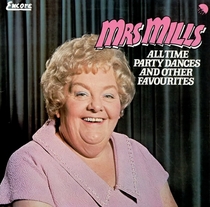 Pianist. Born Gladys Jordan at 154 Beckton Road, Silvertown, Newham, Essex. She was the supervisor of the typing pool at the Treasury and played piano at various venues in the evenings. She was 'spotted', and persuaded to turn professional. Her first appearance on television was on the Billy Cotton Band Show, and she soon became a national favourite, (always known as Mrs Mills). She recorded many albums, all of the 'singalong party' type. She appeared on the Morecambe and Wise show and was wonderfully impersonated by Ronnie Barker on the 'Two Ronnies' show. Died at St Joseph's Nursing Home in Beaconsfield after a prolonged illness.

Some of us here at London Remembers have childhood memories of Mrs Mills that bear comparison with having teeth pulled.

This section lists the memorials where the subject on this page is commemorated:
Gladys Mills

Conductor, nick-named "Flash Harry" in recognition of his dapper appearance a...