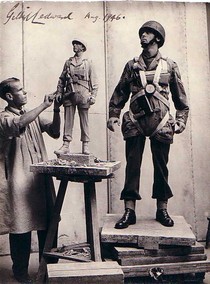 Sculptor.  Born Scotland. More of his work can be seen at the picture source ...