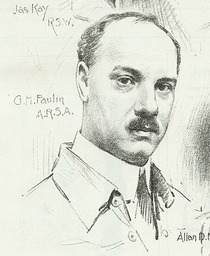 Sculptor.  Born Hungary.  He also has statues of Bartok in Budapest, Brussels...