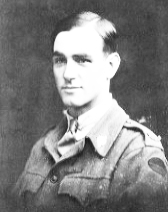 Soldier. Born in South Kensington. He emigrated to Australia in 1912, and in 1915, enlisted in their Imperial Force. He joined the 33rd battalion, and after training in Britain was deployed to the western front. On the 31st August 1918, at Road Wood, south-west of Bouchavesnes, near Peronne, France, two companies became held up by machine gun fire. Cartwright attacked the gun alone under intense fire. He shot three of the crew, and, having bombed the post, captured the gun and nine enemy soldiers. For his actions he was awarded the Victoria Cross.

This section lists the memorials where the subject on this page is commemorated:
George Cartwright VC

{Beneath a representation of the Victoria Cross medal:} Private George Cartwr...

The police station opened in what was then called Cottage Row. The name was c...