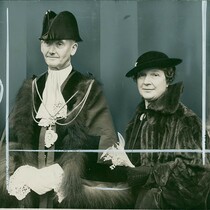 Also a property developer: in 1933, he acquired a Queen Anne building, Lichfield House, in Richmond which he demolished and replaced by two blocks of flats, Lichfield Court, totalling 211 flats in all. These were built in the Art Deco style and are now Grade II listed.

The photo, marked up for publication, shows Broadbridge with his wife. It's not dated but the necklace is not the mayoral chain so we think it predates 1936.

This section lists the memorials created by the subject on this page:
George Broadbridge, 1st Baron Broadbridge

JP, chairman of the Hornsey School and Hornsey Local Board. Active in the Po...