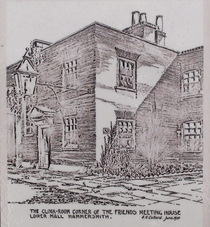 Hammersmith Quakers gives:
"Members of the Society of Friends (better known as Quakers) have been living and worshipping in Hammersmith since 1658 when Hammersmith and Chiswick were farming villages....In 1677, nineteen years after their first gathering, the Quakers of Hammersmith built their first Meeting House at 28 Lower Mall, on the site that is now part of Furnivall Gardens. A tributary of the Thames known as Hammersmith Creek ran through this area. The Meeting House stood among a network of narrow alleyways close to the High Bridge that used to cross the creek.... In the early 18th century Quaker activity in Hammersmith fell away, but the 1760s saw a national revival during which time, part of the Meeting House was rebuilt (1765), its garden was planted with mulberry and walnut trees as was its burial ground – part of which is under the A4 today. ..

The 18th-century Meeting House remained in use up to 24 July 1944 when it was destroyed by a flying bomb. Immediately a place to worship was offered by Rev. J.E. Bolam of Rivercourt Methodist Church where Friends held meeting for worship for eleven years and where a plaque commemorating this can be seen. Quakers had hoped to rebuild a new meeting {sic} on the original site, but agreed with Hammersmith Borough Council – who was planning a new Furnivall Gardens for the Festival of Britain – to surrender their old site.... It was to be set physically aside from the new garden and serve as a Garden of Rest, where it remains today."

The current Meeting House is across the A4, at the southern end of Cromwell Avenue.

Our picture is a photo of an illustration given on a nearby information board.

This section lists the memorials where the subject on this page is commemorated:
Friends’ Meeting House - Hammersmith

Name derives from the nearby hay (or grass) market. Lost in the Great Fire, ...