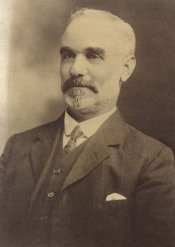 Born Islington. Mercantile marine, Captain of the SS Anglo-Californian. Died in a German submarine attack off the Irish coast. His son, also Frederick, who was on the ship as the second mate, took command and was later awarded the Distinguished Service Cross. Parslow Snr was the first member of the mercantile marine to be awarded the VC in WW1.

Note: 'Mercantile Marine' is the term used until after WW1 for what we now know as the Merchant Navy.