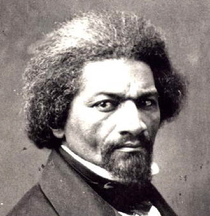 Social reformer, writer and statesman. Born Frederick Augustus Washington Bailey, probably in his grandmother's shack in Talbot County, Maryland. He escaped from slavery and became an agent of the Massachusetts Anti-Slavery Society. In Britain from 1845 to 1847 he lectured on slavery and £150 was raised for him to buy his freedom. Back in the USA he held various public offices and was appointed US minister to Haiti. His writings include 'My Bondage and my Freedom'. Died in Washington DC.

This section lists the memorials where the subject on this page is commemorated:
Frederick Douglass

Founded to promote the study and appreciation of the life and works of the au...