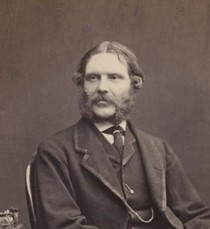 Engineer and architect, and a Captain in the Corps of Royal Engineers.

Born Belfast. In  1862 he was made superintendent of construction of the South Kensington Museum (now the Victoria and Albert Museum). Other works in London: the 1857 Sheepshanks Gallery on the eastern side of the V&A garden; 1860–65 the V&A north and south courts and the residences and lecture theatre surrounding the main V&A quadrangle; the 1871 Royal Albert Hall (his designs being altered after his death); the 1862 International Exhibition building (demolished when the exhibition ended). He won the competition to design the Natural History Museum but died soon after and his designs were substantially changed.

Died suddenly of a burst blood vessel at his official residence in the South Kensington Museum (now the V&A).

This section lists the memorials created by the subject on this page:
Francis Fowke

Francis Fowke designed the buildings for the 1862 International Exhibition in...

Born near Liverpool, son of the Danish Consul. Became an architect in the Art...

Firm of architects. They have worked on the Peckham and Croydon mosques and t...