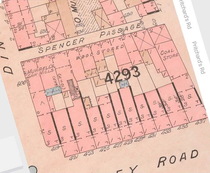 The East London Advertiser, 22 December 2008, published an article on this tragedy where 7 lives were lost, which we summarise here.

Alice Denman, 27, and her 6 children lived in the upper floors of 423 Hackney Road of which the ground floor was used by Owen Murrell timber merchants. A fire broke out in the early hours of Sunday April 20. Alice managed to save 2 children but the others were lost. Alice and a lodger, Alice Briggs, 26, died trying to save the children, as did passer-by Arthur William Regelous, 24, known as Peter. Mr Denman, Alice’s husband, was not at home at the time. The children who died were: Alice Maud, 8; Charles, 6; Ethel, 4; and Winifred, 3 months.

Is it overly suspicious of us to be curious about why the father of the family was not at home in the early hours of a Sunday? In our age it is not unknown for a father to (attempt to) dispose of his unwanted family by setting fire to the family home. But see "2018" below.

On Hackney Road the block between Dinmont Street and Pritchard's Road, occupied by the modern RE Hotel, represents the odd numbers 419 - 437. An 1891 insurance map (pictured) shows "Murrell's Saw Mills", "wood stored" and "coal store", all on this block and "O. Murrell Timber yard" on the block immediately to the north. Number 423 Hackney Road is attached to the Saw Mills with a shaded graphic feature that we can't decode but it's "20' over". This suggests that the newspaper article may not have been correct in placing the timber merchants in the same building and directly below the Denman family.

2018: When we initially researched the memorial we saw some parallels with the horrible Mick Philpott story of 2012. Prompted, via Facebook, by Gill Denman to look again we found, at London Walking Tours, a detailed account of how the fire started, evidence given by the man who dropped the lamp. With this information we can absolve Mr Denman of any suspicion of responsibility and thank Gill Denman for contacting us.

This section lists the memorials where the subject on this page is commemorated:
fire at 423 Hackney Road 1902

Memorial to Alice Maud Denman and Peter Regelous who lost their lives in atte...

This was the last Zeppelin raid on London. The airship had intended to bomb i...