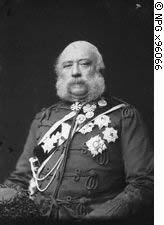 This stone was laid by HRH the Duke of Cambridge KC, May 4th AD 1875

Officially 'The Euston to Thurso Naval Special' this was known as the Misery ...