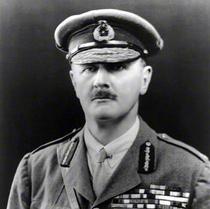 Army officer. Born Edmund Henry Hynman Allenby at Brackenhurst Hall, near Southwell, Nottinghamshire. He fought in the second Boer war and in World War I his command captured Vimy Ridge. Later he led the Egyptian Expeditionary Force in the conqueat of Palestine and Syria. Created Viscount Allenby of of Megiddo and Felixstowe in 1919. Died at his home, 24 Wetherby Gardens, Kensington.

This section lists the memorials where the subject on this page is commemorated:
Field Marshal Allenby

Organisation which relieves need, hardship or distress among men and women wh...